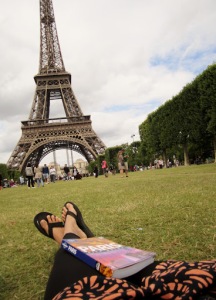 So the title of this blog is a bit misleading because when it’s your first time to Paris, you are the ultimate tourist – waiting in lines, being herded through in huge crowds as you pass through some of the most famous buildings, monuments and paintings in the world. Although Paris in July is a huge mess of touristic madness, at least we weren’t succumbed to the summer inferno as a cold front passed through Paris that weekend – temperatures hovering in the mid 60s during the day. Now, all of you know I am a big baby when it comes to the cold but in my defense, Lexi and I had just come from smoldering, 90 degree (with humidity) weather in Barcelona – it was all a total shock to our internal temperature regulators! And, it’s July people – give me a break Paris, really highs in the 60s? Anyways, the weekend was full of highs and lows, amazing sights and experiences and a few unexpected set-backs.

Unbenounced to me (shows you how much I remember about French history), but I booked our tickets for the weekend of France’s Independence Day, July 14th – known to English speakers as “Bastille Day” but the French find that a bit harsh and thus commonly call it, La Fête Nationale (National Day) or Le Quatorze Juillet(The Fourteenth of July). For your brief review of French history: On July 14, 1789, the people stormed the prison of Bastille, a medieval fortress that was only housing 7 inmates at the time (3 lunatics and 4 drunks they say), in which the people found infuriating as the King was throwing money into maintaining a useless prison, while the people of France were starving. It was a glaring symbol of royal tyranny sitting right in the middle of Paris for everyone to see. The storming of Bastille stands as a symbol to the start of the French Revolution and to the fall of the constitutional monarchy (i.e. later the storming of Versailles and the beheading of King Louis XIV and Marie Antoinette).

Our hostel was located in the charming neighborhood of Montmartre tucked away in the northern part of the right bank (Note: Stairs are abundant in this neighborhood of Paris. I got a fabulous 3-day glut work-out). Montmartre is known as the “un-tainted” area of Paris, free of the tourist crowds, with a plethora of quintessential cafes and pastry shops. When we finally checked into our hostel, Caulaincourt Square Hostel http://www.caulaincourt.com/, we find out that one of our roommates grew up in San Francisco, is currently a junior at UC Davis and is volunteering with under-privileged kids in the school district that Lexi works in. She was just on her way home from a quarter-abroad in Germany and was planning on applying for the University of California Washington DC Program, in which she picked our brains about. I think it would be appropriate to say here…SMALL WORLD! Although the rooms were incredibly small for 6 people (not to mention having to share one mirror/shower between 6 girls!), it was clean and quiet and provided a complimentary breakfast.

After dropping our things off at the hostel, we headed off for The Latin Quarter, known for being the hip and trendy “student district” of the left bank as it is the center of three Parisian Universities. We were expecting to be overwhelmed by the celebrations for Bastille Day (you know, like the 4th of July where there is red, white and blue everywhere…parades…outdoor markets…fairs etc). Aside from a band playing patriotic music outside of Notre Dame, it could have been mistaken for just a normal Saturday in July. I will just assume the French were feeling a personal sense of patriotism inside their hearts. After a quick stop and tour through Notre Dame we hurried back to the hostel for a little “beautifying” time as Lexi had a special surprise in store for us that evening. Her Grandparents had gifted her a little extra money for her Europe trip and she decided she wanted to do something extra special for Bastille Day. After a little research, she found a highly rated Bastille Day Dinner Cruise and what do you know, they had a table available! [Highly recommended if you are ever in Paris, and no, it is not some cheesy tourist thing…read the reviews! http://www.bateauxparisiens.com/ dinner-cruise-paris.html) So, there we were, all gussied-up and giddy with excitement sitting in-between France’s elite (and a lot of wealthy foreign people) for a four-hour boat cruise along the Seine River – complete with a gourmet 6-course meal, live music, and front row seats for the fireworks show. And I quote Lexi, “I am just a high-school teacher…if they only knew what our hostel looked like!” 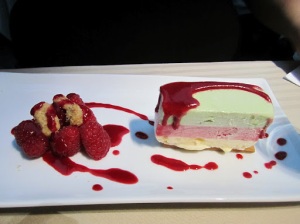 Around 11pm, while the “common folk” fought for the best spots on surrounding bridges, our boat parked right in-front of the Eiffel Tower and we had front row seats to the Bastille Day Fireworks Show. As the clock struck midnight, we said our good-byes to our new international friends (and our waiter Cal) and our magic carriage turned back into a pumpkin, as we crammed onto the metro with thousands of other people headed home after the fireworks show. But we will never forget our Cinderella-like evening in Paris. We never thought, after our fairytale-like weekend in New York three years ago (limos, Broadway and fine dining), that we would never be “princesses for a day” again. Guess we are just two very lucky girls!

[Below: Video we made from our Bastille Day Cruise!]

Sunday morning we took a train outside of Paris to the Palace of Versailles – the royal chateau which housed the royal family and their court for over a century from 1683 to 1789. Not only massive in size, the inside is lavishly decorated – dripping in gold and marble, paintings, sculptures, and hand-made furniture – a true symbol of the extravagance and over-consumption of the French monarchy. Moreover, the never-ending 2,000 acre French landscaped Versailles Gardens are a sight to behold and surround the west side of the palace. The excessive and unrestrained spending of the last king of France, Louis XIV (mostly on his aid to the Americans and his additions to Versailles) and his legendary wife, Marie Antoinette (who had a love affair with shoes and designer dresses), whom both took over the thrown in their very early 20s, has been disputed as the driving force behind the French Revolution. Marie Antoinette has remained a historical figure for both France and pop-culture in general and has been the center of many novels and films, including, “Marie Antoinette” (2006) in which Kristen Dunst plays the pretentious, young French queen.

A random note about our return back from Versailles: Lexi and I were sandwiched in the train station with a bunch of other tourists trying to catch the next train. There were barriers and ticket machines in which you needed to go through to pass onto the train. They were two-way ticket machines, much like the ones in Barcelona, where you can only go through when it gives you a green arrow and if someone is coming through from the other side, it flashes a red-X (i.e. “wait”). Well, the next train was going to leave for Paris in about 5 minutes, and mind you, there was ANOTHER train 15 minutes later. For whatever reason, people started panicking because they kept trying to go through the ticket machines that were flashing “red Xs” and were getting smashed and caught in the plastic doors. People were shouting in at least 10 different languages (I know I heard Spanish, American and British English, German, Italian some kind of Indian, probably Turkish, a few different Nordic languages), children were whimpering, babies crying, husbands and wives looking worriedly at each other. At one point a child made it through to the other side without his mother and the mother started freaking out in some Arabic language. Younger people started scrambling over the ticket barriers and everyone began screaming that they needed to wait their turn. It was almost like the world was going to end any moment and this was the last train that takes you to the shuttle that takes you to the space-station where you will be one of the 500 people who start the “new earth.” So much added unnecessary stress, that left Lexi and I completely perplexed afterwards.

After arriving back in Paris around 6pm, we knew that if we wanted to go up the Eiffel Tower, this would be our only chance because our flight left the next day. So, there are two lines – the “lift line” and the “climb the stairs” line. I was set on climbing the Eiffel Tower – cheaper, line was a quarter of the length and well, I just like to say I’ve climbed things. Lexi was set on taking the lift up to the top. So, we split up with plans to meet back at the hostel. Two hours later, I had waited in line, climbed up and back down and was on my way back to the hostel. As the evening passed by – 9:30…9:45…10:00 – I started to worry. Finally, Lexi walks through the front door of the hostel wearing a newly purchased “I Love Paris” sweatshirt and I immediately began to scold, “You had me worried sick! Where have you been?” And then she began her grueling tale of spending 4 hours in the “lift line,” freezing in her shorts and t-shirt (let me remind you about the cold front that blew through Paris that weekend), and making friends with the girl next to her in line so she could run off and buy food and a sweatshirt. Needless to say, Lexi sure made the grand sacrifice to wait in that line because in the end (poor thing), she was up all night with a fever and bed-ridden the next day. But, like a trooper, she encouraged me to “press on” for our last day in Paris and I ventured over to the Louve to see the incredibly “teeny-tiny-don’t-know-what-all-the-hype-is-about” Mona Lisa, took a last look at the Eiffel Tower and made a stop at Napoleon’s Arc de Triumph. Thankfully, Monday brought sunshine and I spent my last hour in France at a quaint café enjoying a hearty lunch and a nice glass of wine, while writing postcards. The perfect ending to a “nearly” perfect weekend in Paris.

[Below: Video of me climbing the Eiffel Tower]